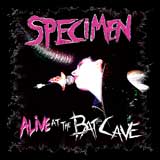 Alive At The Batcave

Specimen formed in Bristol, England during 1980. Their first show was at a street party celebrating the wedding of The Prince of Wales and Lady Diana Spencer. In 1982, the band relocated to Soho, London, where they would play many shows at the infamous club known as The Batcave. Specimen's vocalist Ollie Wisdom founded and ran the club during 1982-1983. Prior to forming Specimen and opening The Batcave, Ollie was the vocalist for another band known as "The Unwanted". While the band were together, they never released a full album, only singles and an E.P., though in 1997 two full-length compilations would be released featuring various Specimen songs. On July 11th, 2008 the original Specimen line-up from 1983 (Olli Wisdom, Jon Klein, Kevin Mills, Jonny Slut, & Chris Bell) appeared live at the BATCAVE club in London (Club Antichrist) along with Sex Gang Children and DJ Hamish. To mark this special event, the live show was recorded and will now be released as Alive At The Batcave. 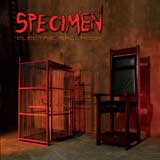 Specimen · Alive At The Batcave