The laws of human anatomy dictate that if you squirt a stream of scalding hot water up your left nostril, two things will happen. The first thing that will happen is that you will cause permanent damage to your sinus tissue and your first line of defense against infection will be rendered useless for the rest of your life. But secondly, and most important for our purposes in this piece of propaganda, the water will exit your from your right nostril. In order for water to enter and exit your head, it takes two nostrils!!!

Like the apple falling from the mountain and hitting Isaac Newton in the face, this was a real-life, real-time event that happened to one of today’s leading rock stars – Electric Six’s Tyler Spencer. Upon cycling boiling water through his sinuses for kicks, he realized it was a metaphor for his approach to creating music.

“The water,” thought Spencer “is God’s love. And it goes in me and destroys my sinus walls and immune system and comes dangerously close to my brain. In order for God’s love to come out of me and become music, I need a second nostril. And that second nostril should be my friend William Bates from the band Fall On Your Sword. He has a studio in New York City. I live in New York City. We can do this quite easily.”

And so it was that Evil Cowards came to be. Bates and Spencer kicked out the 13 songs that would comprise their debut CD Covered In Gas at a pace of their choosing. The infectious album opener “Love Pigs” was borne in their first session and it was decided then that more songs had to be created. The two men, unafraid to make songs sound catchy and repetitive and formulaic, did just that. Because those are the types of songs that stay in your head, unlike scalding water, which will exit your head via your right nostril, William Bates.

Tyler Spencer is an American. Nowhere is his robust Americanism more pronounced than in his ode to the two most American of endeavors – love and war. In the funky “Sex Wars” we pay homage to the greatest generation, our GIs and our jarheads. Yes, they went overseas and they killed some guys, but they also liked to fuck. Somehow the two things become the same. That’s what this song is about. And it’s catchy!!!

William Bates in an Englishman. The album closer “Chopping Up the Teacher” is sung by Bates in his native tongue – English. When you are English, anything is possible. You have abandoned the Church and your toes are still tapping. But you still need to confess. Best to do it while you are pissed and hanging out with your mates at the Hawley Arms.

To summarize, Evil Cowards released their debut album entitled Covered In Gas on May 19, 2009 with Metropolis Records. Every song on the album was catchy while bathing in the majesty William Bates’ unique production. The band's live performances promise to be as entertaining as the record itself. Choreography, nudity, live animals, prosthetic limbs – all these things will feature in the Evil Cowards live show. Neither Electric Six nor Fall On Your Sword are ceasing operations. Evil Cowards are here to stay. 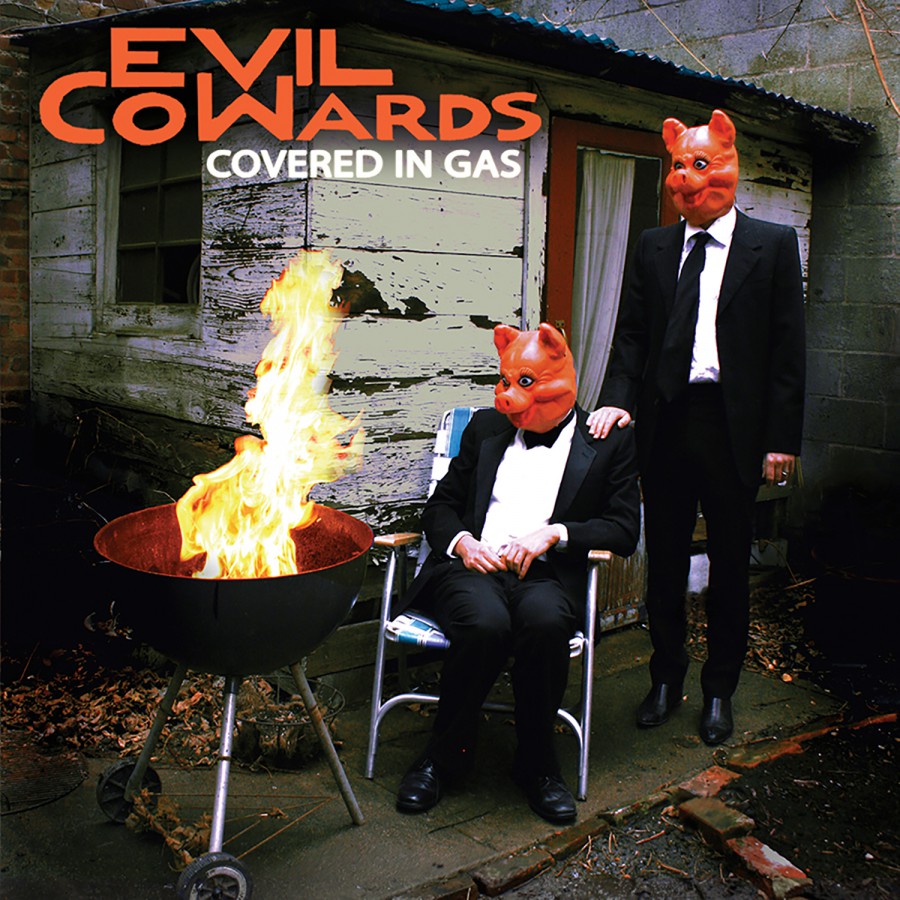